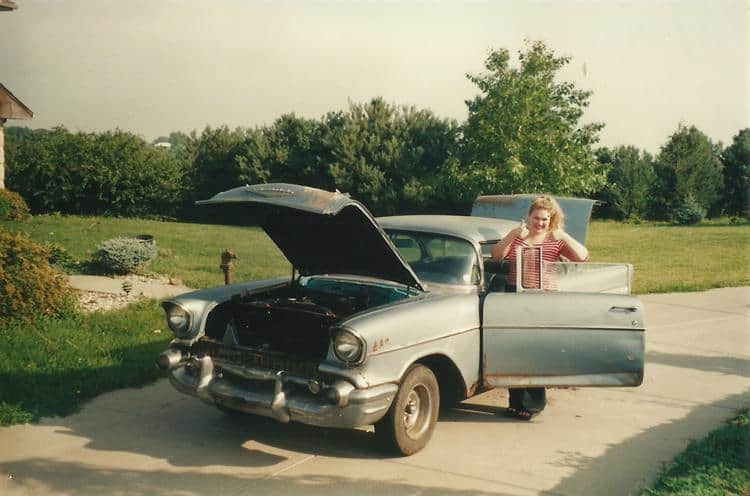 As far back as I can remember, I was interested in cars before I could even drive, from rides at Chucky Cheese to building a soapbox race car with my dad. When I was a teenager, I won a poster of a Chevrolet Bel Air ’57 at a fair. There was something about this turquoise car that I had to have, so I went looking for the car of my dreams, but some things happened first.

For me, one car brings another. I turned 16 and went in search of my first car. A friend of my dad’s had a ’55 Chevy Stepside for sale, so he took me to look at it. I liked the blue and cream Volkswagen show truck enough to get a loan (which I paid off in 6 months) and with cash in hand I made an offer. My mom wasn’t in town at the time and she opened the garage when she got home, looked at my dad and said “Kevin, what have you done?” Thinking he had bought the truck for himself.

He said, “I didn’t do anything to look at your daughter.”

I had fun taking her to the drive-through with friends, the drag strip on weekends, and winning the high school class at almost every auto show in and around Omaha. It wasn’t a practical first car so I didn’t drive it to school and when I drove it to work my mom would pull over on the way home, drop her car off for me and drive it back to the garage . This is what led me to my next car, a Chevelle ’71.

I bought my second car before I graduated from high school. After attending a handful of auctions, I saw an ad in Autotrader for a Chevelle in Valparaiso, Nebraska, and went to look at it. It was that one.

The only owner, whose numbers match Chevelle, became my daily driver for the next five to six years as I finished high school and continued my education. I fixed things as they went wrong with the help of my dad and friends. We pulled the engine out and restored it when the timing chain broke on the way home from a car show, repaired and painted the whole car when rust started showing on the panels. custode and so on.

I’ve driven it everyday, even in the winter, and we all know what a Nebraska winter can do to a car. So now, 20 years later, I’m making it look like it did when I bought it, but that’s another story.

I still didn’t have my dream car, so I kept looking. At one point I found a dusty ’57 Bel Air pearl that has been completely restored. I made a deposit only to find out the guy was in the process of getting a divorce and didn’t want to share the profits with his ex, so he backed out.

My parents also fueled the fire. One Christmas they made me do a treasure hunt, which ended in the garage and I was sure it had to be a Bel Air. It was, but not a car. It was a Bel Air ’57 radio / cassette player.

I continued to browse the classic car ads in the newspaper every weekend until one day there was a Bel Air Sport 57 coupe going on sale in Omaha. My father and I went to see him. The engine corresponding to the numbers had already been rebuilt but it was a project car. A project that I was willing to undertake to get the car of my dreams, so I bought it on June 29, 2001.

The car also came with boxes and boxes of old numbers. Chevrolet classic international dating back to when I was born in the early 2000s when I bought the vehicle. Each issue included technical articles explaining how to restore the car. The work started with a full, out of frame restore and these tech articles have proven to be useful, proving that content marketing works.

My dad and I took the bag off the car and tagged everything as we went. During disassembly we had a few surprises – the floor was rusty and there were pits under the aluminum side panel insert – the car needed a lot of bodywork. In July 2001 the car was out of the frame and descended to full metal.

I didn’t want a lot of infill in the car, so as part of the restoration it got new quarter panels, door linings, front fenders and a floor. You’ve heard of barn finds, but have you heard of barn restoration? After a lot of realignment I took it out of the body shop (which is no longer there) and the body builder finished the job in my dad’s barn.

After the bodywork was completed and a lot of sanding and prep work, the car received a new coat of paint. In November 2005, the car had its original colors of tropical turquoise and Indian ivory for the first time since it was built in 1957.

Then it was time to put everything back in place. In total it took about 10 years to complete, but every nut and bolt has been restored to the original. My goal was to have it completed in time to enter it in the Young Guys category (before I got too old) at the Goodguys show at Kansas Speedway. After a lot of blood, sweat and tears, it was finished in time to go around the track.

I will keep Bel Air forever. As for the truck, it is the only vehicle I have ever sold. There were things I didn’t like. I’m building a ’57 Chevy Stepside with my dad to replace it and the Chevelle is currently being restored.

The story does not end there. I had a 2004 Avalanche after graduating from college which will need a restoration soon and my daily driver is a Supercharged Rocky Ridge Callaway Tahoe.

And after? Now that I have a family I would love to have a Nomad ’56 and my husband, who is the real mechanic in the family, is looking for a Nova ’71, which he drove through high school and the university. I think we will have other projects in the future.

This story was originally posted by Kelsey Bugjo with Speedway Motors.

When a Rekoned automaker makes a restomod, the result can be impressive