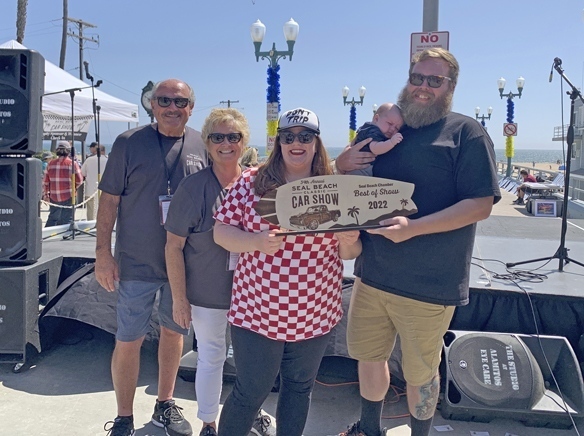 Bikers, locals and car enthusiasts had plenty to see, hear and taste at the 34th Annual Seal Beach Classic Car Show. Under blue skies, with stunning views of the ocean and pier, this age-old event thrilled crowds with the sights and sounds of over 530 vintage cars, continuous music, and delicious food and drink.

Some parents have been seen pushing or pulling young children in car-shaped strollers. Some car enthusiasts brought their dogs. Police were present, of course, but there were no incidents on Saturday, April 30, according to SBPD Lt. Nick Nicholas.

The Car Show is Seal Beach’s flagship event. It is also the main fundraiser for the Seal Beach Chamber of Commerce.

Audience favorites this year included live music throughout the day from four bands playing on two stages, with Down the Hatch and Familiar Faces Band in the morning and Flying Squad Band and OC Ragdolls in the afternoon. The Seal Beach Lions Club provided breakfast and lunch.

“It was amazing to feel the excitement in the air and see so many smiling and happy visitors, residents and local business owners,” Way said. “The show was a huge success and we owe it to our tireless volunteers and generous sponsors,” he concluded.

• BEST – CHEVY ’58 – ’72 – sponsored by the ORANGE COUNTY BOARD OF SUPERVISORS, Supervisor Andrew Do is a 1969 Chevy Camaro owned by Todd Fox

• BEST – PORSCHE – sponsored by Deborah Bell, Keller Williams is a 1962 Porsche 356B owned by Mike Scroggie