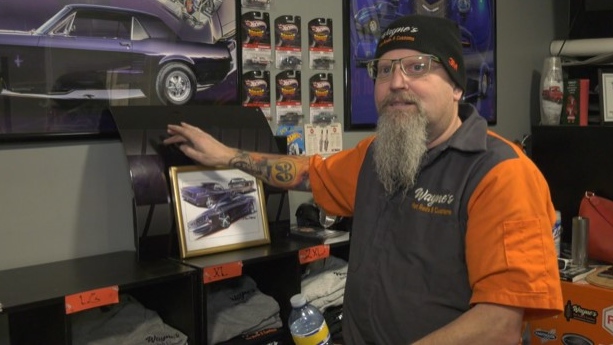 A man from N.S. rebuilds a classic car to honor his late son and encourage conversations about mental health

The garage at Wayne’s Hot Rods and Customs in Waverly, Nova Scotia is lined with classic cars in various stages of construction.

Among them are a 1968 Dodge Super Bee, with its shiny new coat of red paint, and a 1932 Ford Roadster, waiting for its new seats.

Wayne Bishop has been building classic cars for decades. But there is one in the garage who is particularly close to his family’s heart.

It’s a 1970 Dodge Barracuda stripped of its original body — a project Bishop is undertaking with the help of his daughter Kaitlynn.

It’s a symbol of the life he had to rebuild after his son, Chris, died by suicide in August 2020.

“It was a Saturday morning and Chris was gone,” Bishop said.

The loss hit the Bishops hard, as they had no idea Chris was struggling so much.

Chris would have turned 21 on Monday.

Described by his family as athletic, outgoing and witty, Chris shared a passion for vintage vehicles with his father and began helping his father when he was 12 years old.

“I think the very first time I remember him helping me was helping me register a 1968 Corvette, so that was a lot of fun,” Bishop recalled.

After Chris died, his big sister, Kaitlynn, knew what they had to do.

They decided to rebuild a car in honor of Chris – choosing the classic Barracuda, or “Cuda” as they call it.

“It’s something he would be so proud of if it was his,” Kaitlynn says.

“Chris liked the faster muscle car,” adds Bishop. “So we thought it would be a cooler car for him.”

As well as bigger tires and a new 6.4-litre Dodge Challenger engine, the car will also sport a racing stripe down the side, with Chris’s name on the rear, as well as a family crest. .

It will also be painted a new color, custom-made by Kaitlynn, which will look a rich purple in daylight and almost black at night.

“His favorite colors were pink and purple, and dad vetoed pink,” laughs Kaitlynn. “So, we went with a purple.”

Apart from the stock body, the rest of the car is custom built from scratch with one goal in mind.

Bishop wants to take the ‘Cuda to car shows across North America, starting with SEMA in Las Vegas, to get people talking – first about the car, then about the reason behind it

It’s a conversation about mental health. According to Bishop, more people should have it more often.

“I didn’t at first, because my big thing was, what did I do wrong, you know? What did we do wrong? Now I know, we don’t. We didn’t do anything wrong. I just didn’t know, and how am I going to know if I don’t talk about it?”

Some of these conversations, Kaitlynn says, are already happening.

“I have a very close friend who was suicidal in the past,” she says. “And she tells me all the time, after hearing from mom and dad after that day, that she couldn’t put her family through this, and she’s a person we know for a fact, that we have touched.”

Their hope is to reach many more.

Bishop says the car will likely take two years and more than $200,000 to complete.

The pair sold calendars and t-shirts to help raise money for the construction, while asking car companies for help.

They say it will be worth it if they can help others who have been affected by mental health issues and continue to rebuild their own lives, one piece at a time.

Which classic car isn’t worth collecting?