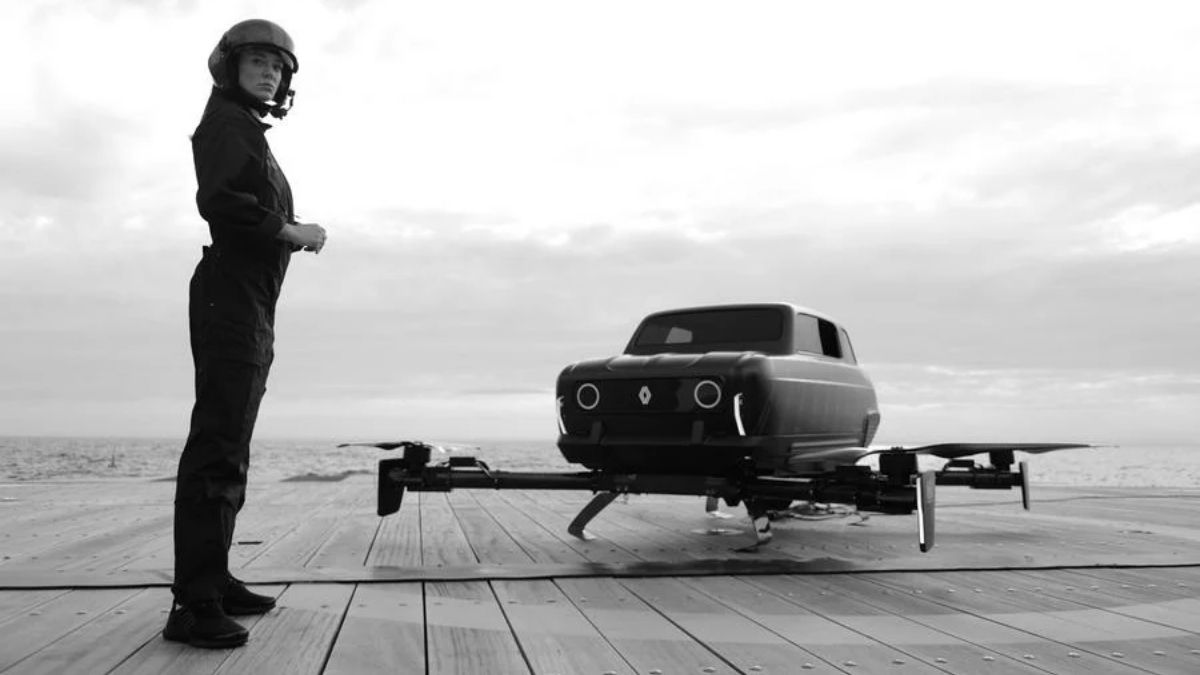 The Renault 4 was a capital model for his creative enterprise. It was the world’s first true mass-produced hatchback. It was also Renault’s first front-wheel drive car and during its manufacture it was a great commercial success.

This year, Renault has decided to celebrate the 50 years of the Renault 4 with the presentation of the concept of a new electric vehicle.

The quadricopter concept presented by Renault

This flying vehicle, named AIR4, looks a lot like the Original 4L, although constructed from carbon fiber. The entire body of the aircraft rises like a canopy to reveal a small, comfortable cabin for two with space for luggage and helmet.

According to Renault, artificial intelligence helped design this quadcopter and the results, although only a concept for now, are enough to be put to the test if they decide to go down this route.

Strictly speaking, the AIR4 cannot be classified as a flying car, as its propulsion system is based on four two-bladed propellers. This class of vehicles is generally seen as an alternative to play the role of air taxi in the future.

Technically, several 22,000 mAh lithium polymer batteries are at the heart of the AIR4, which has a total capacity of around 90,000 mAh. The Renault AIR4 can reach a maximum horizontal speed of 26 m / s. Its maximum altitude is only 700 meters, nothing exaggerated, but enough to fly over even some tall buildings.

Renault AIR4 was created by Patrice Meignan, CEO and founder of TheArsenale, direct collaborators of this project. When it was created, he commented: â€œFor 60 years, Renault 4 has been driven by ordinary people who make it extraordinary. It is a car that symbolizes adventure: simple, practical, useful and as modern as it is retro. Most drivers will tell you, it makes it possible to travel differently and have an adventure. This â€œdifferent journeyâ€ inspired my team and myself. With AIR4 by TheArsenale, the Renault 4 is ready for one of its greatest adventures to date â€.

The renewed version of this model which, between 1961 and 1992, sold over eight million units, could put this classic model back in the spotlight. In any case, it takes time to know if this conceptual presentation will actually materialize.

Regardless of this, it is a clear sign of interest in entering this sector, in which other companies in the field like Hyundai and Toyota have already started to establish themselves.