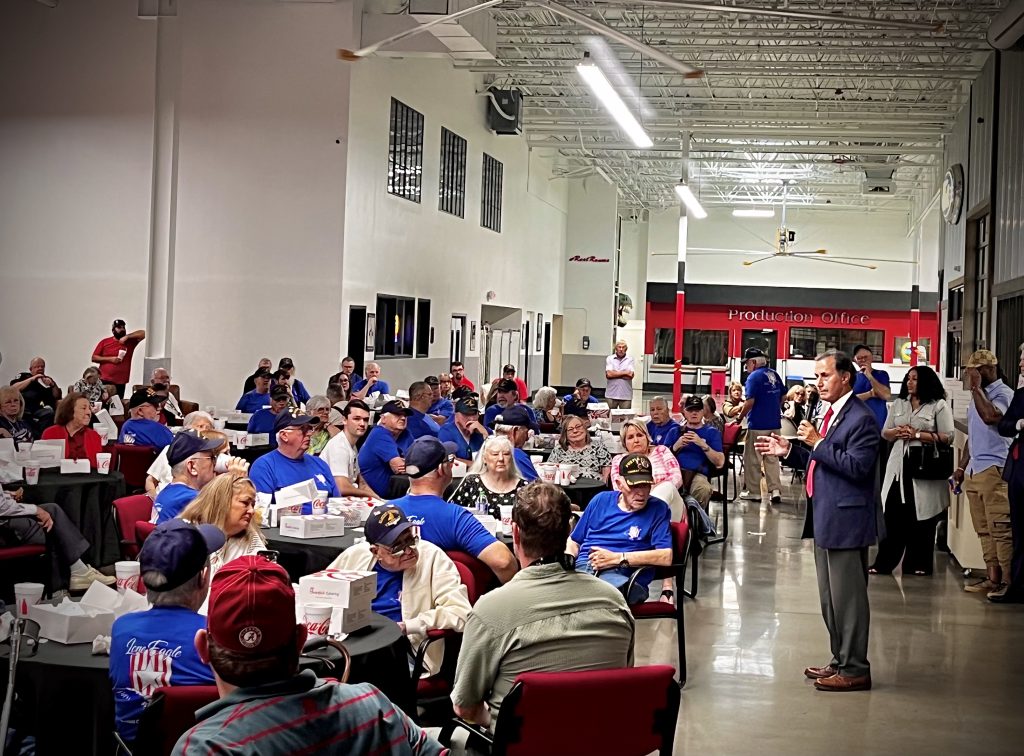 The Irondale, Oneonta, Jefferson County, Leeds, Trussville and Mountain Brook Police Departments, as well as State Troopers and the Irondale and Leed Fire and Rescue Departments, have all lined the entrance to Classic Car Motoring with flashing lights and a raised American flag. because the veterans received a police escort at the ceremony.

This event follows the return of these veterans, all of whom are from Blount County, from their honor flight, a trip to Washington DC, which was funded by the citizens of Blount County.

“For two years, at the height of Covid, the citizens of Blount County — no businesses — donated,” said Blount County Memorial Museum curator Amy Rhudy. “We raised nearly $90,000 to send veterans from Blount County to Washington DC”

The trip allowed 86 veterans and approximately 70 guards to visit the nation’s capital. One of the honor flight veterans was Ron Marsh, whose son works at Classic Car Motoring. Scott Marsh approached his employer, Jeff Baggett, to find a way to honor veterans more, and Baggett immediately began formulating a plan. 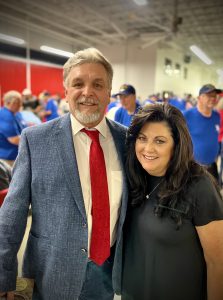 With tears in his eyes, Baggett described what it means to him as he watches these underrated American heroes gaze adoringly at the American flag as they take the pledge of allegiance.

“Look how they look at that flag, how they support that as a team,” he said. “We wonder why our families are broken; we wonder why our businesses are not succeeding. It was a team. When you fight for your life, you work as a team. … That’s how you succeed in life.

Congressman Gary Palmer spoke at the ceremony about the legacy of the United States Armed Forces and how the veterans seated before him championed the ideals of freedom on which America was built. 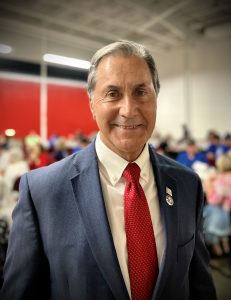 “If it weren’t for those who chose to risk their lives to serve in the armed forces, obviously we wouldn’t have a country,” Palmer said. “One of the kids here asked me what my favorite movie was; I mean this sincerely, it was old Walt Disney Davey Crockett… Do you remember that part in Congress where Davey Crockett comes down and argues against the Indian treaty and he tears up the treaty? Do you remember he said he was trying to figure out what was right and then he said, ‘I’m going ahead’? And then at the end of the movie , he’s the last one standing, brandishing his musket. I wanted to be like Davey Crockett.

Palmer said he read a lot as a child and one of his favorite subjects was history. He told veterans the story of George Washington and the Battle of Trenton, which took place on December 25-26, 1776. 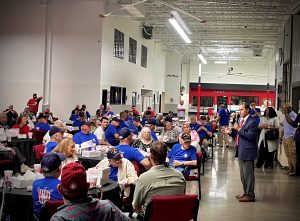 “When the order came, every man got back in the boat and saved our country,” Palmer said. “It wasn’t George Washington’s genius; it is the commitment of the ordinary everyday soldier that has made our country what it is. It was the will to obey orders. It was the willingness to endure incredible hardship beyond anything that could reasonably be expected of them. This is what gave us our country.

Additionally, Palmer said his uncle served in World War II in the Battle of the Bulge. Recently, when a Belgian, who was six years old when the Germans took over his village, contacted his uncle to express his gratitude, Palmer’s uncle replied, “We were just doing our job.

“It’s the essence of the American military,” Palmer said. “It is the essence of each of you. You have done your job. … We are United States but we are united individuals, and each of us has a responsibility and whether or not the country can continue this great experiment in freedom depends on our ability as individuals to do our duty.

After Palmer’s speech, Baggett returned to present every veteran who attended, and many who were unable to attend, an award he named the “John Wayne Award”. 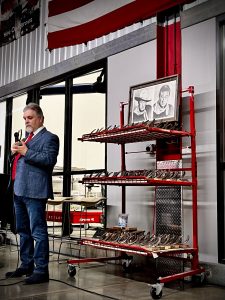 Baggett said he was inspired to name the award after John Wayne after asking three of his employees, all of whom were in their 20s, what the name John Wayne meant to them. They didn’t know who he was talking about.

Actor John Wayne has been an American icon for decades, representing honor and integrity to many.

“This award is called the ‘John Wayne Award’ because they (veterans) can identify with John Wayne,” Baggett said. “The most important thing I have to say is that we have them to thank for the 55 years since the war. It could be a child that they taught…taught them values. We no longer teach values, (but) we have to re-teach those values. Yes ma’am, no ma’am, prayer, appreciation. And when you’re wrong, say you’re wrong and say you’re sorry. That’s how we build integrity and that’s what goes with John Wayne.

The Eastwood Village Chick-fil-A in Irondale sponsored the event with free meals for veterans, and Evolutia, a Birmingham company specializing in reclaimed wood, donated very special timber for the construction of the awards.

When Baggett contacted Bart Bicknell with Evolutia, Bicknell told Baggett that his money was “not good” and that he had just received lumber from the Mobile Bay jetties that were used during the Vietnam War.

“The blonde color is heartwood,” Baggett told veterans. “That’s you at 18 or 19, when you enlisted or when you were drafted. … The darkest color in the wood is you today. … That’s what you endured .

Baggett also reached out to a friend to request about 100 rusty, worn horseshoes — the ones that showed life. These horseshoes were mounted on blocks of wood. 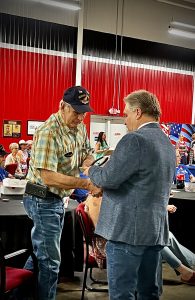 “They are an example of what America was built on and what America needs to be back to,” Baggett said. “They are teachers here. We have to learn from them while they are still here. 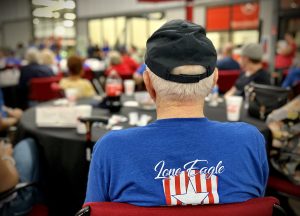 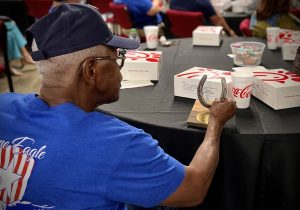 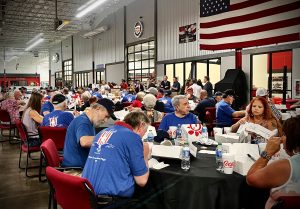 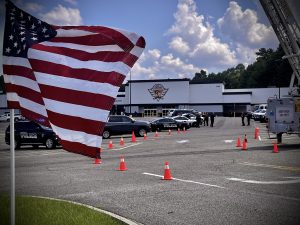 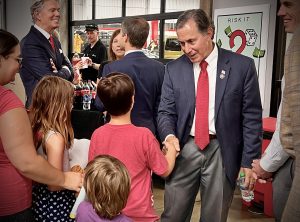 Congressman Gary Palmer meets and inspires some of the younger generation present at the event. Photo by Matt McGough