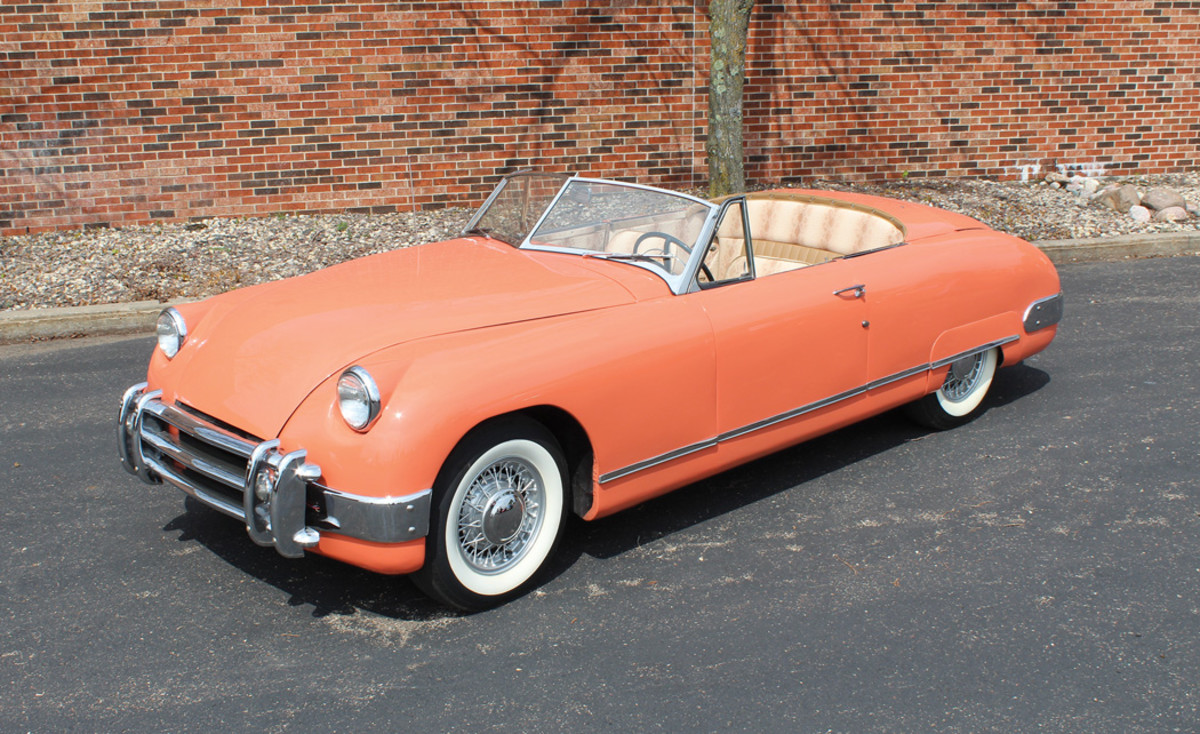 Mark Besser wanted to get his hands on a Muntz Jet so badly that he really wasn’t in the mood to be picky. He probably would have been happy to land one of the approximately 50 Jets that would still be alive.

The fact that he got a REALLY cool one, and one that has a pretty fun and interesting story, turned out to be a bonus.

“I like quirky cars,” notes Besser, a resident of Boliver, Mo. “I have a Playboy…with a folding hardtop. I have a Kaiser Darrin, with sliding doors. I have a L-29 cord, which I really like. I like unusual cars. I want something you can’t see.”

“I chased these [Muntz Jets] auction and trying to find one. I missed one in Cape Girardeau, Mo. It was the only one I could really find, so I bought it from a dealer in St. Louis. It originally belonged to a clown from the Ice Capades. It was originally sold at a Muntz dealership in California. I have the original bill of sale and everything.

The original “clown” owner was the late Freddie Trenkler, an Austrian immigrant who achieved fame and notoriety as a crazed comic over many years in movies, on Broadway and with the Ice Capades. He bought the car new for around $4,500 and apparently had the car until 1992.

All of the remaining Jets are labeled rare and unusual, but Besser’s car is even rarer than most. Of the 198 Jets believed to have been built between 1950 and 1954, only 29 were built in Glendale, California before production moved to Evanston, Illinois. Besser’s car is #25 and one of the last cars to be built. in Glendale. The car is fitted with the 145 hp Lincoln engine, which replaced the Cadillac engine used in the first handful of cars. It is also one of only two known cars remaining that have aluminum fenders, which were used early in production but later replaced with steel doors and bodies. The California-built jets also used a slightly shorter 113-inch wheelbase and low-profile windshield frames. And, it’s one of the few cars – estimates are fuzzy on how many there were originally – that were optioned with the outrageous snakeskin interior.

Besser’s Muntz Jet was sold new by the company’s Sunset Boulevard sales office in August 1951 to Trenkler, who was among a list of celebrities who owned Jets. Grace Kelly, Mickey Rooney, Clara Bow, Vic Damone and Gloria DeHaven all owned Muntz Jets at one time, and Clark Gable gifted one to his wife, Josephine Dillon.

Trenkler sold the car to a California collector and car enthusiast in 1992, and the second owner restored the Muntz to its original condition. At one point, Trenkler had the car painted maroon, but the second owner had it reverted to its factory color combination of salmon with the optional textured snakeskin interior. Fittingly, the car was on display for some time at the Peterson Museum, one of the greatest automotive sanctuaries in the world.

FROM KURTIS TO MUNTZ

Frank Kurtis was the builder of many race-winning cars in Indianapolis before he decided to try his hand at making high-performance sports cars for the mainstream. His first series of Kurtis cars from 1949 to 1950 had simple, understated styling using fiberglass bodywork. The engine could be whatever the buyer wanted, but Kurtis often installed a slightly modified flathead Ford V-8. Kits were offered and varied according to the number of components desired by the buyer.

Production of the first generation Kurtis ended in 1950, when Frank Kurtis sold that part of his operation to Earl Muntz. With a few modifications, the Kurtis became the Muntz.

Earl “Madman” Muntz had made it big in the television business before turning to selling cars. Prior to opening his Muntz Car Company in Glendale, California, Muntz had been a successful salesman at Kaiser-Frazer dealerships in New York and Los Angeles, compiling a small fortune in the process. renamed the car the Muntz and made some changes. The wheelbase was stretched three inches and turned the car into a four-passenger. The styling of the aluminum-bodied car remained virtually unchanged from its Kurtis appearance. Muntz’s manufacturing operations were moved to Illinois. The Cadillac engine used in the Kurtis was eventually dropped in favor of a Lincoln V-8. It gave the Muntz a reported top speed of over 108 mph.

The Jet was heavier and better handled than its Kurtis predecessor. Transmission choices were either a General Motor Hydra-Matic or a Borg-Warner three-speed. The Jet stood 54 inches tall and was built with body-on-frame construction, independent front suspension, live rear axle and leaf springs. It featured advanced benefits such as power steering, four-wheel hydraulic brakes, dual coil ignition and dual exhausts. Other standard features aimed at the premium buyer included: a leather interior; Stewart-Warner gauges and a center console with a Muntz radio. In addition to snakeskin upholstery, the Jet may have been the only car in the US market with an optional “ice box” in the rear seat armrests. It also offered seat belts and a padded dashboard – two safety features that were not yet common.

Logistics led the company to move from California to Evanston in 1949. Operations moved again in 1952 to North Sheffield Avenue in Chicago’s Lake View neighborhood.

In a story familiar to many start-ups, the hurdles of reaching critical mass in production and building an efficient network to sell the cars proved too much for Muntz, and operations eventually ceased in 1954. Earl Muntz admitted after the fact that he suffered a loss of around $1,000 on every car he built, due to the inefficiency of building cars on such a small scale.

If nothing else, the Jet helped pave the way for the “personal luxury car” niche that was to follow, with models such as the Thunderbird, Jaguar E Type, Chrysler “Letter” cars, Studebaker GT Hawk, Oldsmobile Toronado and Buick Riviera, among others, proving that Muntz had a winning idea, even if the execution failed. It also gave guys like Besser a very cool car to chase and cherish.

Besser has a bunch of wonderful cars in his personal collection these days, but the Muntz Jet will undoubtedly remain at the top of the list. He knows he’ll get a lot of quizzical smiles every time he pulls it out from people who’ve never seen or heard of a Muntz. And even “car guys” who know the Jets appreciate the racy convertible because of its rarity and unique place in history.

This summer, Besser drove 700 miles from his home to Iola, Wis., to display the Muntz at the big Iola car show. As usual, it was the only Muntz in sight.

“I have other cars that I put out, but I take them out and drive them,” he says. “It drives very well. It has a lot of power for this age car. It doesn’t have enough brakes, but I think it drives very well. It’s quite pleasant to drive on the road, and well sure, there’s a roof that pops up, so it’s a convertible.”

“Yeah, this one was hard to get, and I really like it, so I plan to keep it. I know how hard they are to find!

SHOW US YOUR WHEELS!

If you have an old car you love, we want to hear about it. Email us at oldcars@aimmedia.com

Want to get a taste of Old Cars magazine first? Sign up for our weekly e-newsletter and get a FREE digital download of our print magazine.