Lotus Cars’ replacement for its iconic Elise sports car, the Emira, will cost Â£ 75,995 when it launches as the flagship V6 First Edition.

A new vehicle configurator has now been launched for the new model, which initially exceeds the Elise’s starting price by around Â£ 45,000 but will be available with a more affordable four-cylinder i4 engine from the fall next.

In its first edition, the mid-engined Emira comes with a 3.5-liter V6 engine delivering 400 hp transmitted to the rear wheels via a six-speed manual transmission or an optional six-speed automatic.

The new model will be essential for Lotus Cars’ growing franchise car retail network, which has prepared for growth with a new corporate identity and alignment with the brand’s new omnichannel retail strategy. .

Some of the latest developments in the UK network include the relocation of a dealership to the JCT600 site in Bradford, the opening of a new dealership by Park’s Motor Group in Hamilton and the increased representation of Hendy Group with the addition of new concessions in Hampshire and Devon.

Commenting on the release of pricing and finish details for the new Emira today, Lotus Cars Managing Director Matt Windle said: Make the first cars very special to own.

â€œThe features have been carefully selected by our design team to create a truly special and distinct First Edition. “

Lotus announced in January that it would take its Vision80 strategy forward in 2021 with the launch of a new Type 131 sports car to replace its iconic Elise and a move to a new Â£ 100million manufacturing plant at its headquarters. social of Hethel.

Today, Lotus said the Emira will build on the legacy of the Elise, Exige and Evora, but represents “a leap forward”.

The car rides on ultralight 20-inch V-spoke forged alloy rims, with two-piece brake discs with branded calipers that are part of the First Edition specification. 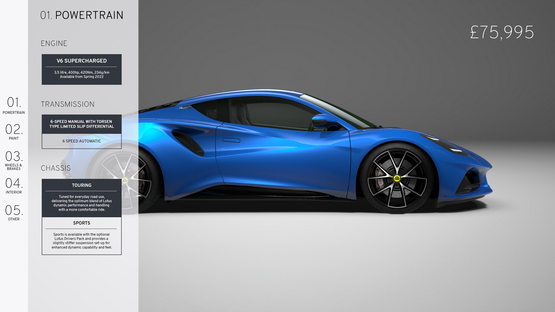 There are seven interior color choices, meanwhile. They are red; black; Grey; and beige nappa leather, as well as black Alcantara with red, yellow or gray stitching.

All functions of the Emira’s infotainment system are accessible via a 10.25-inch touchscreen, with a 12.3-inch TFT instrument panel also placed in front of a multifunction steering wheel.