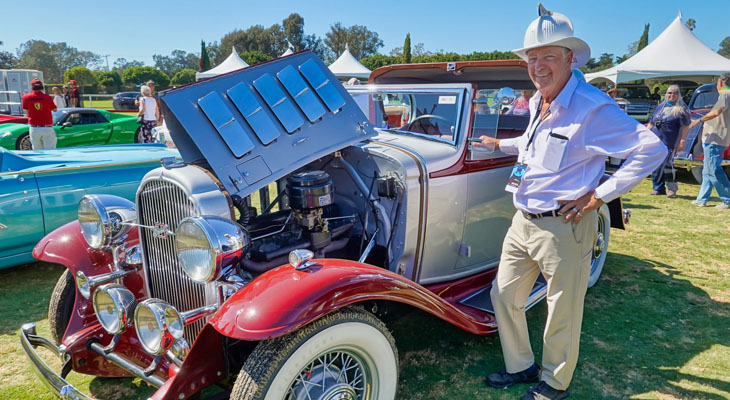 I had heard of the Montecito Motor Classic Car Show for years, but thought it was out of my price range. It turns out it’s completely free for viewers! People who show their cars pay! They pay $ 150 to show off a car, but that might just be a small part of their spending. Some came from far away and had to bring their vehicles on a trailer. These people have a passion for their cars and are happy to share them with the public.

Here are my photos from this recent event at the Santa Barbara Polo and Racquet Club.

So many cars and photos that it’s hard to pick a few to showcase. Make sure to check out all those photos I can’t share here. My wife and I quickly went to see this Munsters Koach used on the 1960s TV show “The Munsters”.I remember watching the show when I was a kid when it first aired. We never owned a color TV growing up, so it was a treat to see it in vivid color now. As explained in the panel in the photo, the original was built in 1964 on three 1927 Model T cars. It was supposed to have the appearance of a hearse. It was built by George Barris who made only one additional copy. That’s it.

Most of the cars on display were production vehicles. Like this woody Rolls Royce.

This vehicle was certainly not a production model and was a highlight of the show. This is a racing car built on an original fire truck chassis and assembled from many sources.

Its creator Gary L Wales was happy to talk about it at length. He calls it “La Bestioni”. It is a tribute to the Fiat S76 “Beast of Turin” model built in 1910. It was driven by American driver Arthur Duray during a land speed record attempt in December 1913 in Ostend, Belgium. It has obtained the unofficial status of the fastest car in the world. The original had a huge 28 liter engine with just four cylinders! His tribute car weighs only 14 liters spread over six cylinders.

This photo shows Gary Wales posing with his friend in the driver’s seat. You can see the engine and the wooden spoked wheels a bit.

These photos show the process of creating this beast.

This is a 1926 Bugatti Type 38. The owner (in a checkered shirt) explained that it was a luxury vehicle, giving it a more complex ancestry. He said the vehicles were sold as a chassis with an engine and transmission chain. It was then up to the buyer to contract with a “bodybuilder” to build the custom bodywork for him. There would be a lot of options available. I was impressed that there were no metal spoked wheels at the time. He said he actually had metal spoked wheels. But as was normal, the original owner put on these futuristic hubcaps to hide the spokes!

Next to it was this 1928 Chandler. Back then there were a lot of auto companies and most of them were either taken over by big companies or gone out of business. Chandler went bankrupt in 1929.

Cars from this era were quite scarce on instrumentation and controls as you can see in this interior photo.

This gentleman had driven all the way down Morgan Hill in the Bay Area to show off his Ford Model A hot rod. He was very happy that this salon let him in. He said most classic car shows don’t allow hot rods. I think this is my favorite photo from the show! I mentioned that when I lived in the Bay Area I hiked Henry Coe State Park with the Sierra Club. He was delighted to hear that; he said it was his view from his house.

This Mr. Dana Newquist is one of the founders and directors of the Montecito Motor Classic show. Here he proudly shows off his Buick. Another magnificent production car.

And here is his Ford fire truck!

In addition to the cars, there was also an exhibition of military vehicles and a UH-1C “Huey” helicopter from the American War in Vietnam. My wife wanted to pose in the helicopter.

This gentleman had obviously worked hard to organize this section of the show in order to keep alive the memory of those Americans who served in Vietnam.

I asked him what he thought of the war. I can’t exactly print what he said. But he went on to explain that he felt that American fighters had no right to win. He said fighters on the other side could flee to neighboring countries and the Americans were not allowed to follow. He also said that fighters on the other side would use a school or hospital as a shield and that they were not allowed to shoot there.

I asked how it should have been different. He admitted that they should not have been allowed to shoot at schools or hospitals. I asked if he thought the American soldiers in Afghanistan were prevented from winning. He agreed that they weren’t held back that way. And he agreed that the result was the same as in Vietnam.

I suggested the lesson maybe the soldiers were doing their best, but maybe the mission didn’t make sense? That maybe we shouldn’t have been there? I then thanked him for sharing his point of view.

To fight against pollution, this city will charge a tax to motorists in old cars