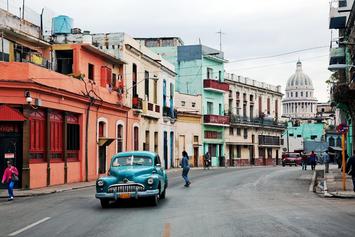 We’ve all seen the photos of Cuba with all their vintage cars from the 40s, 50s, and 60s. Well, these photos of Cuba could be a prelude to what California will look like in the decades to come.

The governor has convinced himself that the devastating wildfires in the state are a direct result of climate change and is doing everything in his power to change the world. The governor is oblivious to the fact that USDA Forest Service data documents the highest number of wildfires that occurred from 1928 to 1936 and that today they are one tenth of the record. that is, this is a 90% reduction in area burned compared to almost a century ago.

Rather than letting Californians drive more fuel-efficient vehicles for decades to come, Newsom’s actions to phase out the sale of gas-powered vehicles by 2035 will most likely cause California to look like Cuba in the decades to come. come, vintage gasoline vehicles being continually renewed. registered each year, which burn less fuel and pollute more than the new, state-of-the-art gasoline-powered vehicles that will be banned in the state.

The governor wants to add more electric charging demands to a dysfunctional energy program that has already shut down one nuclear plant and three natural gas plants in recent years, and has five more to shut down in the crosshairs – the latest Diablo Canyon nuclear plant and four other natural gas power plants. California imports more electricity than any other state – currently at 32% from the Northwest and Southwest and dysfunctionally HOPE other states will be able to generate enough electricity to meet state demands

The Governor’s actions are supportive of jumping on the EV bandwagon, knowing that EVs have a very dark side to environmental atrocities, and the non-existent transparency of human rights abuses occurring in other countries, both of which are directly related to mining for the minerals and exotic metals required by the batteries of electric vehicles.

Zero and low emission vehicles generally come from hybrid and electric car owners who are a group of savants; more than 70% of respondents have a four-year college or post-graduate degree, which may explain why the average household income of electric vehicle (EV) buyers exceeds $200,000. If you’re not in that more educated echelon and in the high income bracket of society, there may not be an appetite for an EV.

Income growth for many Californians has been largely stagnant, especially for the poorest and least educated workers and households, and the 39% who are Hispanics and 6% who are African Americans. With 45% of California’s population – that’s a whopping 18 of the state’s 40 million people – being Hispanic and African American who may not be able to afford new vehicles, there will have ongoing re-registrations of their current vehicles. for the foreseeable decades to come.

In a recent Los Angeles Times article, citing data from Edmunds, the number of battery-electric models available more than doubled from 2018 to 2019, but EV sales have moved in the wrong direction. In response to major efforts by manufacturers, horrific electric vehicle sales data shows that only 325,000 electric and plug-in hybrid vehicles were sold in the United States in 2019, compared to 349,000 in 2018. Half of all electric vehicles in America are found in one state – California. The rest of the country seems to be less enthralled by electric vehicles.

The Governor’s goal to reduce fossil fuel vehicles will also reduce funds for road maintenance as there will be a resultant reduction in fuel taxes and a reduction in fees for environmental compliance programs such as; the cap-and-trade program, the low-carbon fuel standards program, and the renewable fuel standards program, which are currently dumped on posted prices at the pump.

Governor Newsom may have forgotten that no matter what type of vehicles are on the roads, there are huge funding needs for California’s transportation infrastructure and for environmental compliance programs stemming from gas pumps. . California has nearly 400,000 miles of highways that rely heavily on road taxes, the same tax base that will shrink in coming decades. So, in addition to buying new vehicles, owners may think they’re saving money by not buying fuel, but beware – here’s that VMT (Vehicle Mileage Tax) program for vehicle miles traveled on the highways for the state to recoup the revenue they lose at the gas pumps.

Ronald Stein has decades of experience as a certified professional engineer and is a private business advocate for the energy and infrastructure industries.