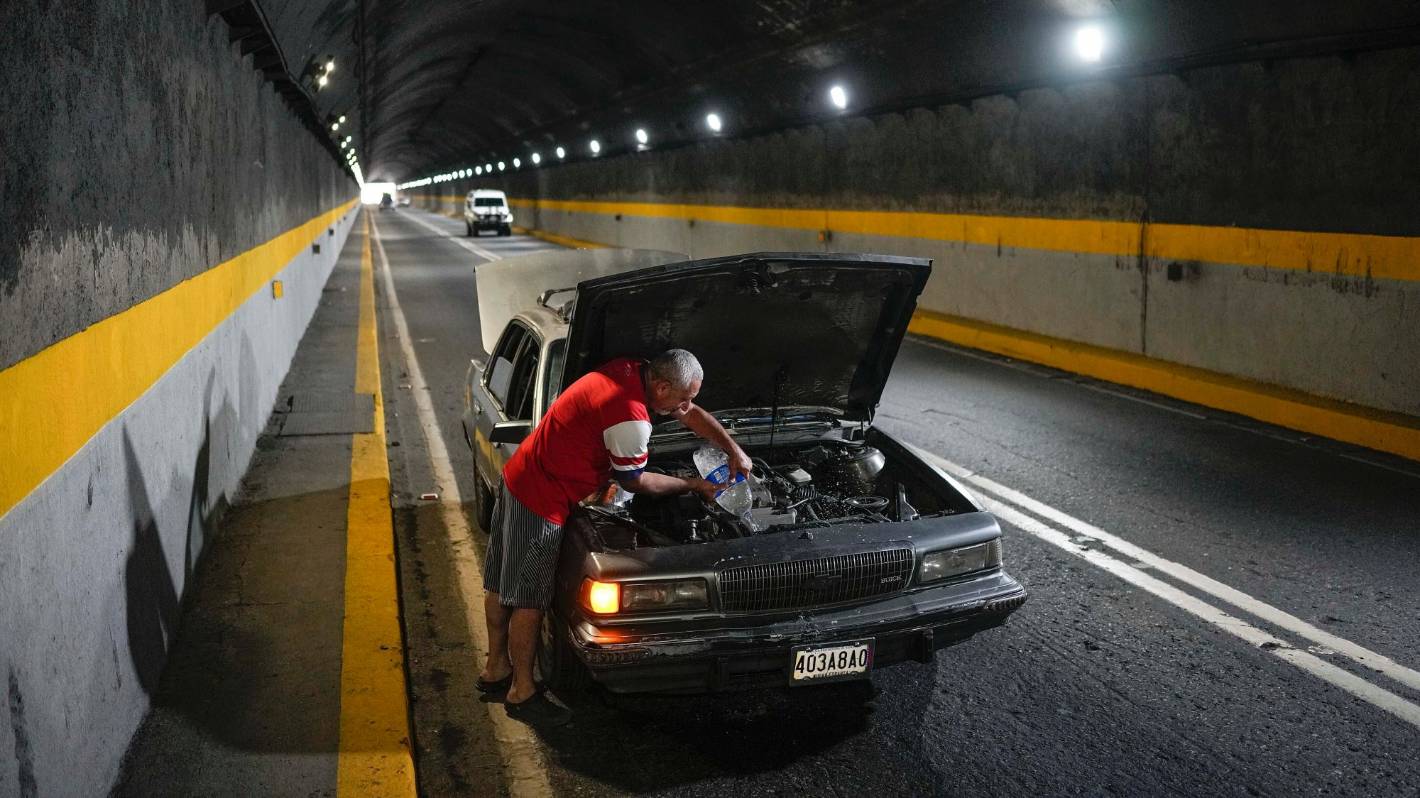 A 1983 Chevrolet C-10 pickup is the workhorse of Argenis Ron’s party equipment rental business. He uses it to transport chairs, tents and tables to rallies throughout Venezuela’s sprawling capital.

The once white paintwork is slightly yellowish and the bodywork has some rust, a few knocks. The odometer was already broken when he bought it 12 years ago.

And with business picking up as the pandemic appears to be slowing, he’s been putting in more miles – and making more trips to mechanics, including a recent visit to investigate a hum-like noise emanating from the left rear wheel.

“When the mechanics ask for parts – the truck asks you – you have to buy them,” Ron said. “We can’t refuse because the truck is a resource for making money.”

He’s philosophical about the need to keep fixing his vintage truck: “It’s not like today’s cars that have a computer and have a lot of system-level stuff. I say (older trucks) are trustworthy and more reliable because they only use gasoline and water.

People like Ron are keeping the mechanics around the corner in Caracas busy these days as they try to breathe a little more life into aging vehicles in a country whose new car market has shrunk. collapsed and where few can afford to trade for a better used one.

Venezuela’s auto industry produced just eight trucks last year — and not a single car — according to the Chamber of Venezuelan Manufacturers of Automotive Products. At the turn of the century, in 2006-2007, some 172,000 vehicles rolled out of factories operated by Ford, General Motors, Toyota, Mitsubishi, Chrysler and others.

Imports did not fill the gap. In 2021, only 1,886 new light vehicles were sold in Venezuela, according to estimates by LMC Automotive, an automotive industry consultancy. That was about double the number in 2020, but less than 1% of what was sold in 2007, when new light-duty vehicle sales peaked at 437,675.

Venezuela lifted a ban on used car imports in 2019. But years of hyperinflation have wiped out much of the middle class who could once dream of at least a used car, leaving wages average monthly bills under US$100 (NZ$156).

This inflation combined with government controls designed to stifle it also meant that banks were unwilling or unable to provide car loans.

So people cling to what they have. Like Eduardo Ayala’s 1999 Nissan Sentra, which was undergoing mechanical surgery at a shop in a working-class neighborhood west of Caracas.

“It’s not that I chose this car, it’s that I had the money for this car,” Ayala said. “I would like to buy a (Suzuki) Grand Vitara, at least a 2005, (but) you also have to adapt to your economy as much as you can.”

Elvis Hernandez discovered the problem that had left Ayala stranded on the freeway a day earlier: a month-old off-brand ignition distributor had failed.

“The vast majority of people don’t have the money to buy a car – that’s the truth. So they’d rather fix the one they have,” Hernandez said. Around him, fellow mechanics worked on d other cars, all at least ten years old.

Venezuela’s roads are full of high-mileage, cash-guzzling vehicles, many of which predate the socialist transformation ushered in by the late President Hugo Chavez at the turn of the century.

A morning commute to work, a quick trip to the grocery store, or a 20km drive to the beach all involve spotting parked cars with someone tinkering under the hood.

Venezuela – with one of the largest crude oil reserves in the world – once had the most prosperous middle class in Latin America and car dealerships boomed.

But a complex social, economic and humanitarian crisis began in the mid-2010s, compounded by falling oil prices, US economic sanctions against the government and – critics say – blatant mismanagement of the economy.

By 2020, about nine out of 10 families that were once classified as middle class had fallen into the ranks of the poor, according to the Inter-American Development Bank. By one measure, the monthly income of these once middle-class households has fallen from the equivalent of US$830 per month in 2012 to US$195 in 2020.

Many of the spacious dealerships that once served them still bear their logos, but are now empty or house other businesses. Those opened in the capital tend to target the upper class. A Ferrari dealership has three red cars on the floor, each costing over US$400,000.

Some Venezuelans have taken to YouTube for instructions on fixing their own cars.

Somewhere in Caracas is a Honda Civic with a PVC pipe acting as a pipe and a piece of wood holding the battery in place. It broke down on the motorway after a holiday weekend, stranding the four passengers in bathing suits and prompting them to improvise a repair as sweat ran down their blasted faces.

Others can still raise money to hire experts in varying degrees.

Dozens of mechanics operate along the street in the neighborhood where Ron, the owner of an equipment rental business, had his truck repaired. They keep their tools locked away in nearby buildings or other hiding places.

Enderson Ramirez, who specializes in brake systems, said some people have put off repairs for so long that they show up with broken brake pads and badly damaged rotors.

He said some vehicle owners can repair damaged rear brakes, but “they put off doing the front brakes because their budget isn’t enough,” he said. “Well, we negotiate with them. We negotiate labor costs because…if he doesn’t do the job, we don’t get anything.