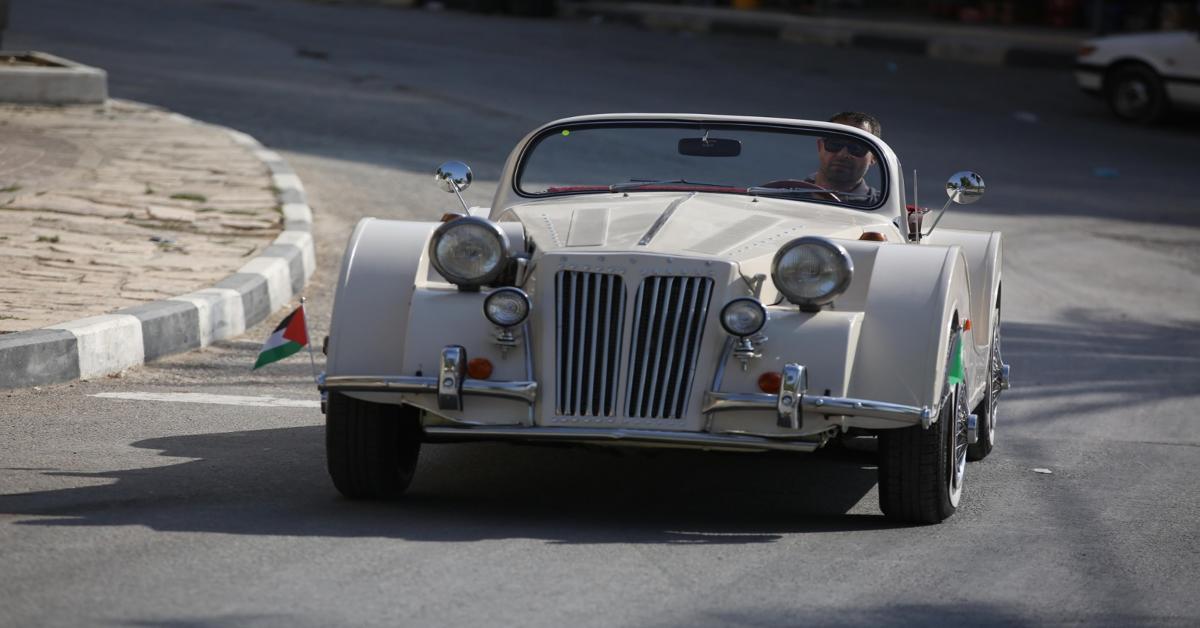 Palestinian builds vintage car in his own garage

RAMALLAH, West Bank – Like many around the world, Riyad al-Amleh, a Palestinian from the West Bank, has a passion for collecting classic cars, an expensive hobby most of the time.

Things are even more difficult for vintage car enthusiasts in Palestine where there is no factory for classic cars, and they are difficult to import from abroad due to their high cost. That didn’t stop Amleh from holding on to his childhood passion and dreaming of one day having his own classic car.

Amleh, a 45-year-old man from the town of Qabalan, south of the northern West Bank city of Nablus, recently finished building a classic car he called “Nouh”, after his youngest son.

The coronavirus lockdown, imposed by the Palestinian Authority (PA) to stem the COVID-19 outbreak, was an opportunity for Amleh to devote his time to building his car in a modest workshop under his house.

The PA declared a state of emergency in March after registering the first coronavirus case in the southern West Bank city of Bethlehem. With the number of infections rising, the Palestinian Authority in July imposed a total lockdown across the West Bank, which remained in place for weeks. This allowed Amleh to complete his project.

Amleh owned a parts store for many years until he expanded his business into a modern car showroom in the eastern West Bank city of Jericho. That didn’t dampen his enthusiasm for vintage cars, however.

“The confinement was long and dreary. So I decided to do something useful with my time and build my dream classic car, similar to the cars made in the 1920s and 1930s,” Amleh told Al-Monitor. “Sometimes I miss modern cars especially since in Palestine there are no classic cars for sale and they are difficult to import considering the high cost. That is why I decided to make a car that I designed myself.”

Amleh spent four months in his small workshop to realize his dream. “From almost nothing, I was able to make a vehicle similar to the classic cars of the early 1900s. I used the materials that were available: old barrels, iron plates, screws and the engine of an old car,” he said.

Commenting on the manufacturing stages, Amleh noted: “I started by sketching the car, then I designed the exterior, which I made sure had all the particular characteristics of the classics, including the elongated bonnet. . It is also a two-seater car.

With his long experience in automobiles, Amleh then worked on assembling the vehicle using old auto parts such as wheels, door handles and engine.

“The car runs normally like any other car. I even drove it around town at a speed of 180 kilometers per hour (112 mph). The engine has a capacity of 1800 cubic centimeters,” he explained.

Amleh hopes to obtain a license for his newly manufactured vehicle from the Ministry of Transport, which he says is “a bit far-fetched”, since the car is made from old car parts. He is, however, happy to use it only at weddings or for photo shoots.

Commenting on the difficulties he has faced over the past four months, Amleh said, “Sometimes I couldn’t find the tools or materials needed, but I worked around those hurdles and used what was available. .

Since he revealed it, Amleh’s car has received a lot of media attention and he has also received many offers to sell it, which he has declined.

“Many people from the West Bank and the Green Line contacted me to buy the car, expressing their willingness to pay the amount I would ask them. I said no. When I did, I was not looking for financial profits. I just wanted to own a car with these specs and features. I wanted to kill time during lockdown. Old vintage cars have been my passion since I was a kid.

“Nouh” is not Amleh’s first automotive project. Two years ago, he made a four-wheel-drive vehicle, which he called “Adam”, after his eldest son.

“The car is a four-wheel-drive off-road jeep reminiscent of old military vehicles used in World War II. I also wanted to own something similar. I assembled the vehicle, but did not add the engine,” he noted.

Amleh said he was pleased with the positive feedback from his neighbors and townspeople, many of whom stopped to take photos, as well as the media attention he received. He said he would be making further improvements and additions to the vehicle in the coming months.

Amleh owns a modern car, but he prefers to drive his classic “Nouh” with his two sons. He can’t drive out of town because the car is unregistered and unlicensed. “I hope the authorities will take an interest in my model of car so that I can drive it anywhere,” he concluded.

Americans of all ages still love their old cars