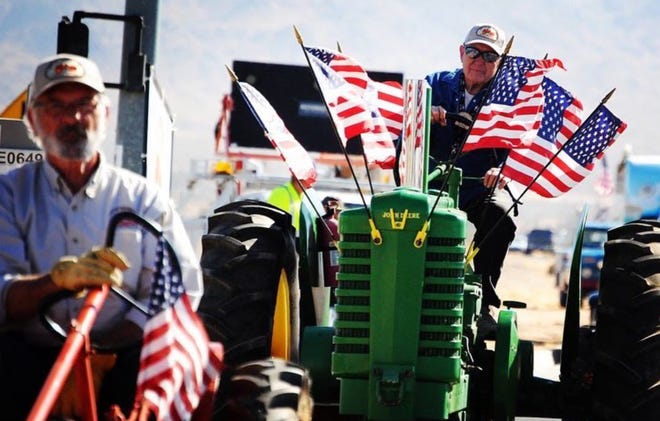 Taylor, the founder of the Apple Valley Legacy Museum, said her group’s float would recreate a scene depicted in a 1960s promotional brochure featuring Roy Rogers and Dale Evans bragging “Apple Valley is for fun.”

The brochure includes an illustration of people – many of whom wear cowboy hats – swimming, dancing, cooking outside, playing music and playing golf, according to Taylor, who is also president of the Mohahve Historical Society.

About 40 parade groups will assemble near Central Road and Highway 18 before heading west on Outer Highway 18 south to Pawnee Road before dispersing onto Powhatan Road.

“COVID-19 forced us to cancel our event last year, but we’re back and excited to invite people to our party,” said village event coordinator Lovella Sullivan.

The parade begins at 10 a.m., followed by the street fair and auto show from 11 a.m. to 2 p.m. at James A. Woody Park at the corner of Powhatan and Navajo roads.

“Our two great parade marshals include the Carpino family and the Alfaro family, both of whom own restaurants in the village,” Sullivan said. “Tom Carpino and Gus Alfaro passed away last year and we thought we were honoring the families.”

“We also have old Hollywood actors that some people may recognize as Steve Connors, the son of Chuck Connors who starred in The Rifleman TV series,” Sullivan said.

Other celebrities include actor Rich Rossi, who played a role in the movie “The Godfather III” and is currently filming a new film in the region. Also, animal rights activist, High Desert resident and actor Randal Massaro, who was on the TV series “Border Battles”.

Comedian and actor Michael Shanto, who has a role in the upcoming film “Under the Jacarandas”, will also appear alongside Robert Lanthier, president of Reel Cowboys, a group dedicated to the preservation and promotion of Western films.

The Greasewood Brothers, known for their eclectic mix of rock, R & B, blues and country selections, are one of the groups performing at the street fair. The name of the group based in the High Desert derives from the greasewood bushes found throughout the region.

Daily Press reporter Rene Ray De La Cruz can be reached at 760-951-6227 or RDeLaCruz@VVDailyPress.com. Follow him on Twitter @DP_ReneDeLaCruz