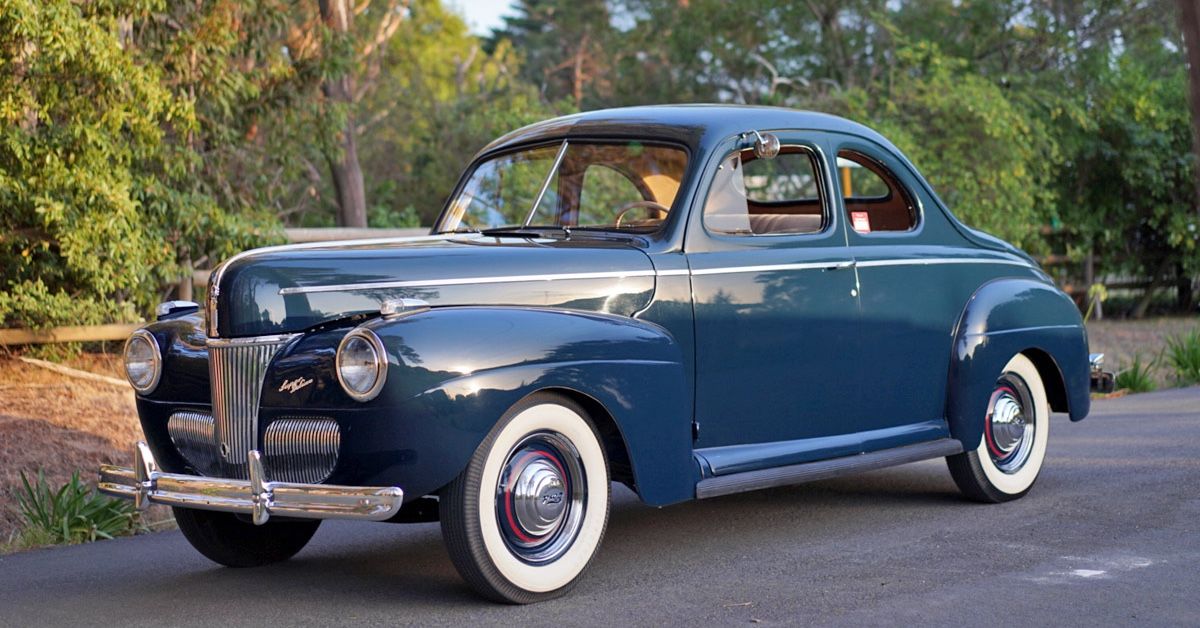 If you remember the 1984 movie The Karate Kid, you will probably remember Daniel Larusso’s famous vintage car. It was a classic then and a true vintage classic now.

The Ford Super De Luxe is the one Daniel waxes before his first karate class with Mr. Miyagi. It has a famous moment that most fans of the film and vintage Ford enthusiasts will not forget. Let’s see why this Ford model is The Karate Kid’s best vintage car.

The Ford Super De Luxe is a 6-seater sedan with two doors and a convertible soft top. These models were produced from 1946 to 1949 only. Therefore, they’re pretty hard to find now, and that’s why he had such a classic moment in the movie.

At the time, the car had a lot of power. It was produced with a large 3.7-liter engine that offered up to 90 horsepower. An improved version was available in its later years, offering a 3.9-liter engine that could exceed 100 horsepower. They were quite heavy vehicles, weighing approximately 3,200 pounds it is therefore not surprising that they struggled to pick up speed.

What makes it a vintage car?

With its production in the late 1940s, this car is a quintessential classic. It was produced by Ford just after the war as an upgrade to their 1941 Super Deluxe Business Coupe. Improvements to the 1946 model offered more power, style and affordability to Ford customers of the day.

After upgrading the model to an electric soft top, which was quite rare at the time, it was in high demand. At the time, the Ford Super De Luxe was one of the only electric roofs, with most of the market being manual. Thus, this model stood out from other competitors of the time. Years later, he made an appearance in The Karate Kid, as well as the Back to the Future films.

Other features that made the Ford Super De Luxe stand out were its cabin-style lights and luxury wheels. The front featured classic Ford red accents and a wide, glossy grille, adding to its luxury frontage.

Why is this the best of the whole movie?

Classic Ford cars were known to be pretty cool in their heyday, as much as they are now. With its electric roof and luxurious styling, it was the perfect fit for the film industry. In the movie, you see Daniel waxing the exterior of the car before embarking on his first karate lesson.

Later in the film, Daniel received the car as a gift for his 18th birthday, which sparked the envy of fans to have one of their own. It was considered an achievement for his hard work during training, so it was considered a special sign and a memorable part of the movie. In the car, the Ford Super De Luxe was a yellow model from 1947, which was one of the first to have a soft top.

Where is the car now

After the car was used for The Karate Kid, it appeared in other films. It has been used a lot for its luxury and classic style. It was, and always will be, a true vintage Ford car, which is why it was perfect for cinema. Since its inception, it is known to be located in a private collection. Maybe one day he’ll make an appearance in other movies and make a statement again. For now, it is stored to maintain its condition.

At the time of production, the Super De Luxe was selling for around $ 1,500. Since this is a famous and true Ford classic, it will probably be next to impossible to get your hands on one now in perfect condition. So it’s no wonder they take such good care of it.

Reports suggest that many car modifiers have sourced old Super De Luxe and restored them to excellent condition before remodeling them to exactly replicate that of The Karate Kid. While not quite the same, replicators were quite popular and sold out quickly.

In our opinion, while the Ford Super De Luxe was an impressive car in its early years of production, it is even more so now. Since appearing in The Karate Kid and a few movies after, many movie and car fans would certainly love to experience it. Since it’s stored away, it might appear in a museum someday for fans to admire. Until then, one can only dream of riding in such a vintage classic from the 40s.

NEXT: Nostalgia: 15 Breathtaking Photos To Remind You Of The Original Ford GT40

Let’s see what makes the Kirov-class battle cruiser a concern of the US and Chinese navies.

Megan McCoig is a London-based writer, probably typing in a cafe or at my office looking out over the city. Pathologically in celebrity cars and the future of the industry.