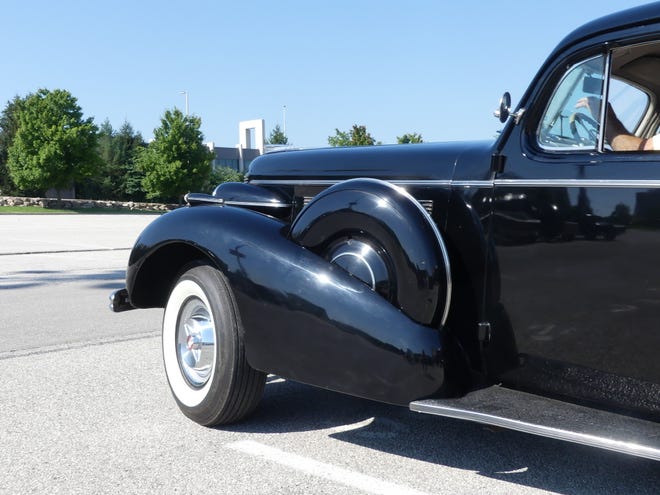 “Hello Laura, In about 10 minutes, at 9:15 am, a group of old cars will arrive at the Assembly Hall from Vincennes for a tour. Be careful in case you want to attend with a camera.

Howard Petri, a friend of Allison’s who once lived in Bloomington, was part of the Vintage Car Club of America tour group parked outside the Simon Skjodt meeting room at Indiana University. Petri owns and drives an immaculate 1932 Packard convertible.

What to do? Answer: Stop writing stories about the gunfire in the Crestmont neighborhood, locate the camera, remove the battery from the charger and go for it.

I have spent over three decades rushing to current events and will be doing a vintage car ride over a fire or shootout most of the time.

And, I know how to take this man’s advice. After all, it was Allison who, after years of coaxing, finally convinced me to attend the annual Newport Antique Auto Hill Climb.

“Laura, you just have to go! his posts would say, and the reminders go back a decade. I received this message in 2011: “Dear Laura, don’t forget the Newport Hill Climb. Americana at its best. Hi, Jim Allison “

This major automotive event draws 100,000 people to the town of Newport, Vermillion County, which has a population of 515, on the first weekend in October.

I finally made the trip, in 2018, the 51st year of ascension. It was immediately understood why Allison had insisted that I go there. So many amazing cars, as far as the eye can see, nothing made after 1970.

I took a bunch of pictures this Sunday. I documented Carl Cook’s slow climb up the hill in his coral green Studebaker and did some tapping as two men with gray beards crept up to a coppery-brown Plymouth from the late 1950s.

“It’s a Belvedere,” said to each other, slowly circling the car, remembering. “I had a lot of partying in a car like that.”

You don’t see a lot of Plymouth Belvederes around, but there were several on the way up that year.

Return to the meeting room. When I arrived on Wednesday the cars were leaving the parking lot. Allison was nowhere to be found.

I missed Petri’s Packard, and I don’t know what else. And avoided being run over by a 1954 Chevrolet as the driver got ready to leave. I took several photos of the two-tone beauty, got the phone number of the couple who owns her, and watched her walk away.

Look up the history of Frank and Cindy’s Chevrolet here, hopefully next week.

By the time I entered the parking lot on Wednesday, half a million dollars of Auburn-made cordon was gone, just like an old Hupmobile, year unknown, which I would have liked to see.

I met a man named Jim Guy that morning. He was driving on Woodburn Avenue to visit his father when a black 1962 Chevrolet Impala convertible passed, followed by a 1937 Buick Roadmaster and then a few other notable classics.

Guy did what I do sometimes: he followed the cars. “Can you believe that? He asked as we stood there.

“I was hesitating as they passed and then decided my dad was going to have to wait,” Guy said.

As the cars rolled out, he told me about a Datsun 280Z his son was working hard to restore before heading to Ohio to start college in a few weeks. The kid bought a 2000 Porsche before he was old enough to drive it and is also working on that car.

Yes, I will write about him soon as well, since I have been invited to his garage to see the cars. So stay tuned.

OLD CARS: The 1983 Thunderbird had a huge influence