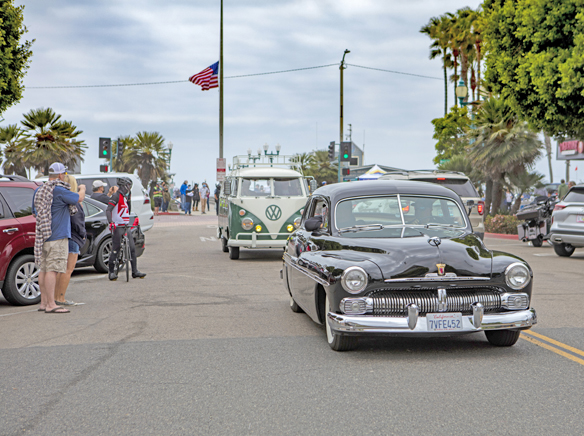 Vintage Car Cruise 2021 – A Rumble From The Past

On Saturday, April 24, the streets of Seal Beach were filled with the sights and sounds of yesteryear.

Nearly 200 carefully maintained vintage cars and trucks roamed the streets of The Hill and Old Town, delighting onlookers with their raucous roars and vibrant paintwork. Leading the pack was Seal Beach real estate agent Wyatt Hill in his 1962 Plymouth Valiant Signet 200, chosen as a symbol of the valiant perseverance of our local businesses over the past year.

The cruise included nearly 200 vintage cars from 1980 or earlier. Seal Beach residents and spectators watched, socially distanced, from their yards, balconies, greenbelts, parks and businesses along the 3 1/2-mile route, manned by volunteers from the Seal Beach Lions Club, led by Nikki Muller.

The event was run entirely on a volunteer basis by members of the Seal Beach Chamber of Commerce, Seal Beach Lions Club and other community members.

“I am very happy with the event and deeply touched by all the support from the community around it. It was fun to see socially distanced people watching from their yards, porches and on greenbelts,” said Tim Way, President of Car Cruise.

“So many attendees mentioned how great it was to cross paths with everyone, saying hello and cheering them on. It made them feel like they were in a parade,” Way said.

Trophies were awarded in eight classes, as follows:

1. The best truck was a 1950 Studebaker pickup owned by Brian Bateman and sponsored by Ferguson Realty.

2. The top convertible was a 1967 Grand Prix Pontiac Convertible, owned by Richard Scandaliato and sponsored by G&M Oil.

3. The best coupe/sedan was a 1967 Chevrolet Chevelle owned by Jimmy Mercurio and sponsored by OPGI.

4. Most unique was a 1936 Great Racer BeerSter owned by Milt Thomas and sponsored by Republic Services.

5. The best car for mom was a 1961 Nash Metropolitan, owned by Patrick Halbert and sponsored by the Seal Beach Lions.

6. Dad’s best car was a 1957 Chevrolet Nomad owned by Don Kammerer and sponsored by Baytown Realty.

7. The best paint color was a 1963 Chevrolet Nova owned by Robert Raices and sponsored by 16th Street Garage.

The first seven classes were judged by spectators who voted online.

It’s not yet known how much money the House made from the car cruise, as the final reconciliation was not complete by the editorial deadline.

The inaugural Vintage Car Cruise, which organizers anticipate will become an annual tradition, is an official event of the Seal Beach Chamber of Commerce and would not be possible without the support of the following event partners: the City of Seal Beach, the Seal Beach Lion’s Club, Boeing, Seal Beach and generous event sponsors G&M Oil, Republic Services, Baytown Realty, 16th Street Garage, the Sun Newspapers, Original Parts Group and Ferguson Realty.

the men who show their old cars every mother’s day