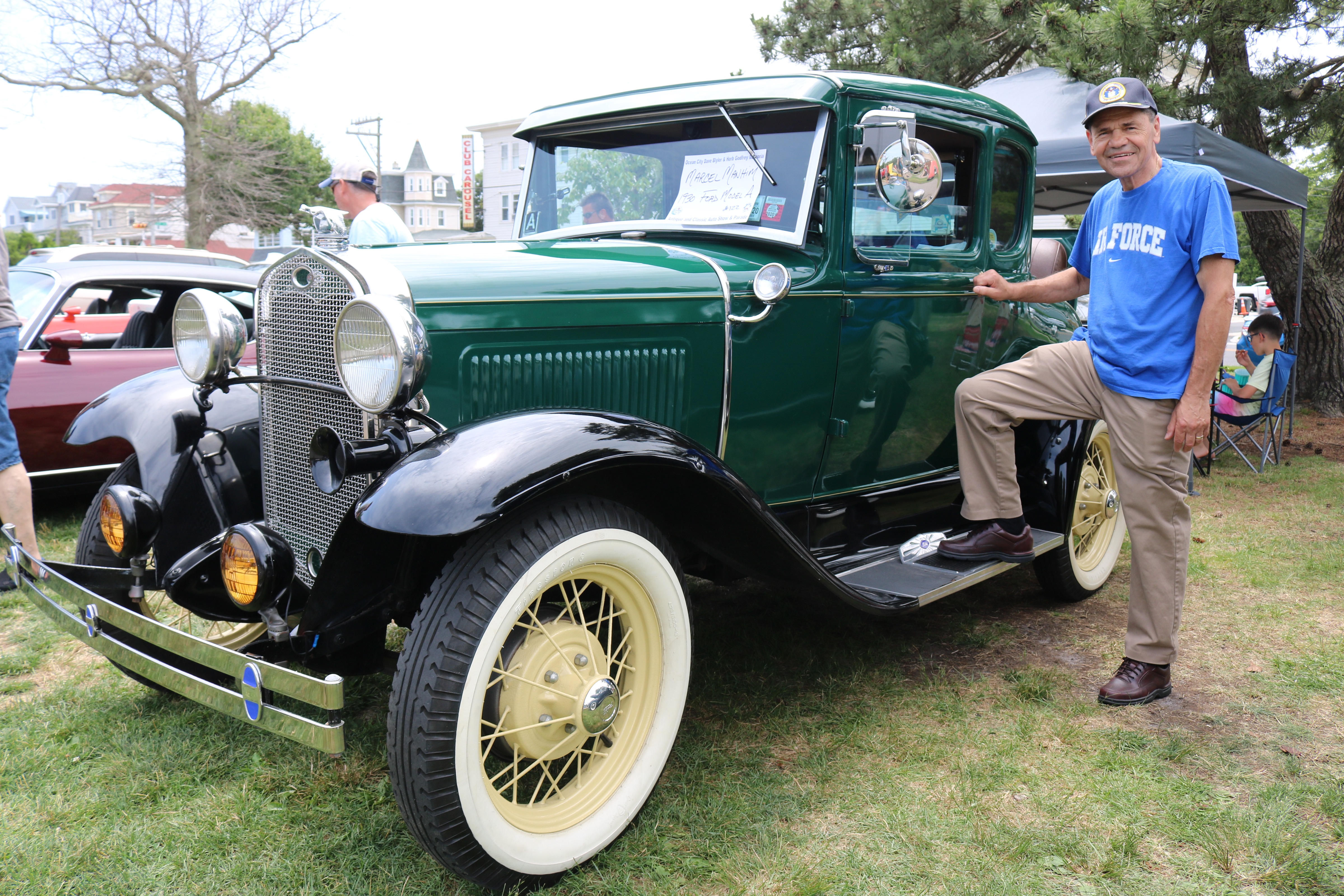 Marcel Manhim’s iconic Ford Model A 1930 is air conditioned. Not the air conditioning that we think of today, however, with our modern cars.

The Model A windshield tilts outward to allow cool air to enter the car while it is on the road, helping the driver to stay cool.

Other quaint features include a rough seat, a retractable rear window shade to prevent glare from the sun, and a storage box attached to the rear of the car that doubles as a trunk.

These quirks – at the time, they were innovations – gave car enthusiasts a glimpse into the past at the 65th Annual Antique Auto Show presented by the Jersey Cape region of the Antique Automobile Club of America.

In total, spectators were able to savor around 160 American and foreign vintage cars on display on the grounds of the Ocean City Tabernacle on Saturday and later in a parade on the promenade.

“It’s just a good mix of cars,” said Dave Blyler, the organizer of the auto show and president of the Jersey Cape region of the AACA. “Car owners can share stories with everyone who comes here. Every car has a story.

Painted in a stately moss green color scheme, the Model A is accented by a silver hood ornament depicting a flying goose, old-fashioned round headlights, a sleek metal grille, and whitewall tires.

Manhim, 74, who lives in Egg Harbor Township and owns a warehousing and shipping business, calls Model A the “elegant lady.”

“My wife and I get in the car on the weekends and drive around the neighborhood. We get a lot of smiles, ”Manhim said of the audience’s reaction. “She reminds us of a bygone era. We must not lose sight of our history.

Indeed, there was enough history on display at the auto show to fill the volumes. For example, one of the oldest – if not the oldest – cars at the show was a 1907 Morse Model B roadster, an automobile that dates back to when Teddy Roosevelt was president.

“It’s just a classic car. I like the old technology, like friction dampers and old headlights, ”said Tony Lardani, an antique car enthusiast who took a close look at the Morse, the first he had seen in person.

Lardani, 69, from Philadelphia, had his own vintage car on display at the show, a 1965 Renault Dauphine, a rear-engined economy car from the French automaker.

Nancy and Jerry Hnizdo, who lived in Richboro, Pa., And have a summer residence in Ocean City, were walking the grounds of the Tabernacle when a black 1951 Chevrolet Fleetline caught their eye. Nancy Hnizdo also loved an old Packard.

“There are a lot of cars here that you can see,” she said. “There is a lot of variety. Each era is represented. The cars are beautiful.

The car show, which is free to the public, was canceled last year due to the pandemic, but drew large crowds on Saturday for its return.

“It was the first show we didn’t have,” Blyler said of last year.

The most evocative car model names in history