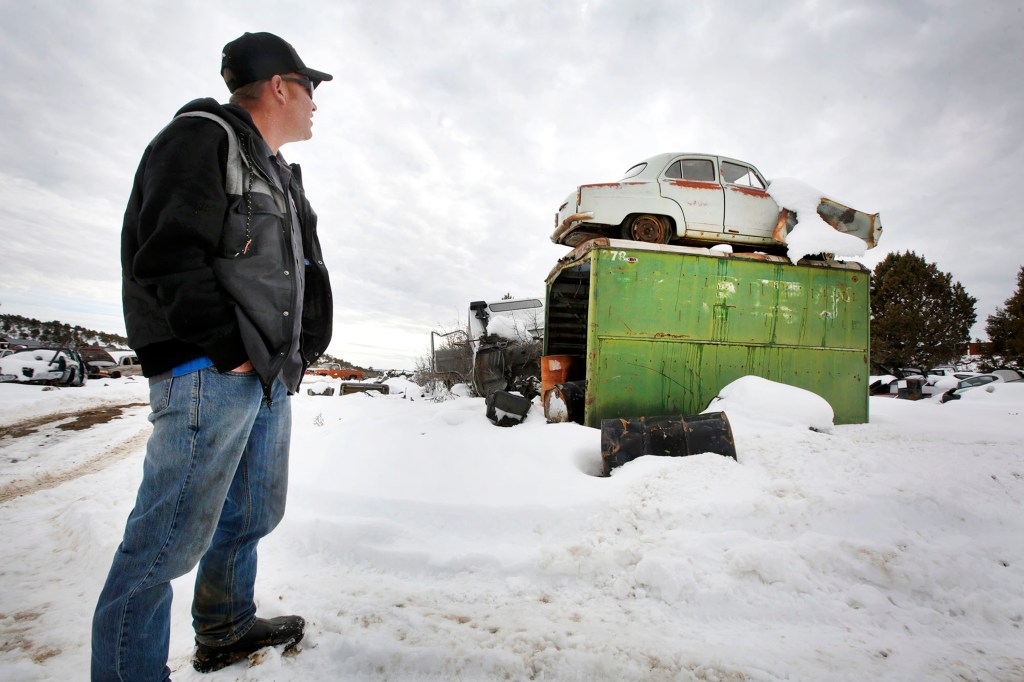 BAYFIELD, Colo. — When your old drummer has made his final drive, chances are he’ll end up at Lon’s Automotive, a salvage yard, machine shop, and used parts dealer near Bayfield.

The workshop, now mainly run by Sean Parmiter, son of founder Lon Parmiter, has just crushed 300 cars, bringing the number of cars in the yard to 700.

“Once we have 1,000 cars, we start running out of space,” Sean Parmiter said during a tour of the 14-acre vehicle graveyard.

Despite its size, Lon’s Automotive is actually a scaled-down operation. During the 1980s and 1990s, the Parmiters operated salvage yards off Sawmill Road as well as the Bodo Industrial Park in Durango before regrouping on the single lot near Bayfield.

The company has its roots in a 68-year-old Chevron station Lon Parmiter, 68, purchased in 1972. The Bayfield lot once served primarily as a storage site for cars from the sawmill yard, Lon Parmiter said.

When finding employees to operate the three lots became difficult and paperwork began to take too much time, Lon Parmiter said it was time to simplify and consolidate the Bayfield lot.

Choosing cars to run over is a bit like a rancher picking cattle to eliminate from the herd.

“I’m asking my managers to do it because it’s too heartbreaking,” joked Sean Parmiter, who admits a fondness for Fords.

In reality, there’s a science to selecting cars for the crusher, cars that are “pretty stripped down” and glamorous boats off the road: Mercedes, BMWs and Jaguars go to the crusher soon after they arrive.

“There is no market for used parts for Mercedes and Jaguar,” said Sean Parmiter.

Based on market prices, the salvage yard receives about $100 a ton of steel from cars, but the rate hit $300 a ton in 2008 when China hosted the Olympics and was buying recycled steel for gigantic construction projects.

Some odd road warriors may be worth more than one might imagine.

Sean Parmiter recalls a call from Canada from a man desperate to get a rear axle for a 1993 Ford Tempo with all-wheel drive.

“You can take a car out of the hands of someone who doesn’t want it. You fix it and sell it. Everyone is happy and it keeps my guys busy,” said Sean Parmiter.

The demand for used parts and the occasional refurbished car employs five employees.

In 2003, Lon’s Automotive shut down its tow-for-hire operation, which means the Parmiters don’t know the stories of how cars end their lives in the salvage yard.

But like everyone else, Sean Parmiter said, “Every car has a story.”

Now, the vehicle acquisition process is more sterile. Most cars are purchased from insurance companies, and the Parmiters have limited information on how vehicles come to rest in their yard.

The Parmiters often get their cars auctioned off at an insurance yard in Delta.

Driving a tow truck, which Sean Parmiter did for his father from age 16 to 19, is a bit of a wild ride.

The story of how a Chevrolet S-10 ended up in Lon’s salvage yard still lives on for Sean Parmiter nearly 20 years later.

In the late 1990s, a young Sean was called to La Posta Road (County Road 213) for an accident involving two vans. He remembers arriving to find a weeping woman in one of the pickups – terrified after having escaped her S-10 – dangling precariously by the side of the road above a ravine.

Instead of pulling the car up, a boulder holding the pickup shattered, sending the truck, which Sean Parmiter remembers as new, tumbling down the ravine.

“I had to knock on the window of the pickup truck and let the woman know, ‘Hey ma’am, your truck, it’s down,'” he said.

Worse still, says Sean, his dad’s insurance had to pay for the truck. “It was an awful affair all around.”

Lon Parmiter can outdo his son, who suffered from hypothermia in the late 1980s after being called to Missionary Ridge to retrieve a fallen Chevy Blazer in the snow.

“I broke a front hub,” Lon Parmiter said of his four-wheel drive tow truck, “and I couldn’t even go down a hill in two-wheel drive. I ran out of gas around midnight and it just snowed 2 feet in. It can get crazy out there.